Born and raised in Clay County, Alabama, Singer/Songwriter Johnathan East always had a passion for country music. Johnathan started writing his own songs, singing, and playing the guitar about his southern country life at the age of twelve. All of Johnathan's songs come from true life experiences, customs, and lifestyles that he grew up with. After years of just playing for friends, Johnathan decided to break out in to the local music scene. He played at wedding receptions, birthday parties, and private events in Lineville, Alabama. Playing around town, the locals fell in love with this modern outlaw country singer because of his rebel attitude and genuine style. His first appearance in the local music scene was at a restaurant called AJ’s in Oxford, Alabama. He was soon known across Alabama and parts of Georgia and was making his way to the top of the local music scene. His solo career had become a great success after all the hard work and dedication he put into his passion for country music.

Beginning in 2009, Johnathan discovered The Crossroads Band and after playing with them for about a year, Johnathan decided to focus on his songwriting. This is when Johnathan wrote and produced his albums "Hayseed", "Fresh Out of Love Songs" and "Hangin' By a Thread" in addition to releasing music videos to his songs “American Boy” and “A Little on the Redneck Side”. Also, during this time, Johnathan formed his own publishing company "Triple East Music". 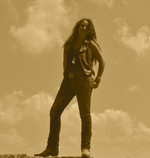 Born May 3, 1994 in Montgomery, AL, a singer, songwriter, and artist now living in Nashville, TN.  Around age 8 she began singing in church and taking piano lessons.  She plays several instruments including the saxophone, keyboard, ukulele, and acoustic, electric, and bass guitar.  At age 12 she began singing at school functions, during high school she began singing at restaurants and competing in regional singing competitions.  She also participated in a Youth Worship Arts Program that helped her discover her vocal skills and allowed her to travel and sing throughout the eastern United States.

She wrote her first 2 songs at the age of 16 and her mom began to send press kits to Nashville but didn’t receive much response.  After graduation in 2012 she won the Alabama Talent Hunt and received lots of encouragement from friends and community to move to Nashville.  Her family began making regular trips to Nashville to learn what they could about the business and promote Laurel.

So, in September 2012 Laurel moved to Nashville to pursue her dream.  She had only one gig scheduled but by the end of her first weekend she was booked for the next two weeks performing at Tootsies, Rippy’s, Rooster’s Bar-B-Que,  and many other establishments around Nashville.  In January 2013 she met and began to co-write with Don Goodman and recorded her first project at The Sound Emporium, produced by Wyatt Beard and Tony Castle.

At the age of 19 Laurel already has many accomplishments but continues to work hard, write, and perform in pursuit of her dream!

The smell of tobacco burns slowly, the taste of Jack Daniels goes down with a sharp grin as a pair of old worn-out boots taps away on the rustic wooden floors. The sound of Waylon Jennings saturates the Green Room backstage. The lights anticipating the arrival of this righteous, homegrown, bearded southern man to walk out and pick up that guitar could not wait any longer. The crowd awaits his loud but heavy-driven guitar to hit their ears. A shadow appears walking towards the mic as the music playing beforehand slowly fades away. You are now in Kyle Wilson’s world. A blues rock song deeply written about the principles his grandfather taught him growing up sets the atmosphere for the night –his reasoning, ideas, and the simplicity of what music is about. You can’t help but like this guy. There is nothing fake about him and he cannot be mistaken for anything else. For the next 90 minutes what you once thought was a revolutionary idea that could never exist again is happening. Real music has taken over your soul and for a slight second you question if Kyle is a reincarnation of one of the Outlaws from the 70’s. The energy, the realness, crafted with every note and every word, is the heart and soul of what Kyle Wilson gives to his fans in his albums and live shows.